It's convention time again here in Belgium, and this year I wanted to go as Lumpy Space Princess from Adventure Time! Since I always get a lot of help from other people's tutorials when working on a DIY project, I thought I'd share the making-of process here! Like many people, I love cosplay but I'm not a great sewer. Sewer? Ew. Is there another word for this? Sewing person? One that sews? Anyway, most people would go to an auntie of a grandmother for help. Me? I have my fairy godmother: Elvi.

For the base of the costume, we used a second hand ski coat. I liked how 'lumpy' it already was, and found it for just 1 euro. However, any base will do. A tight dress would be perfect. 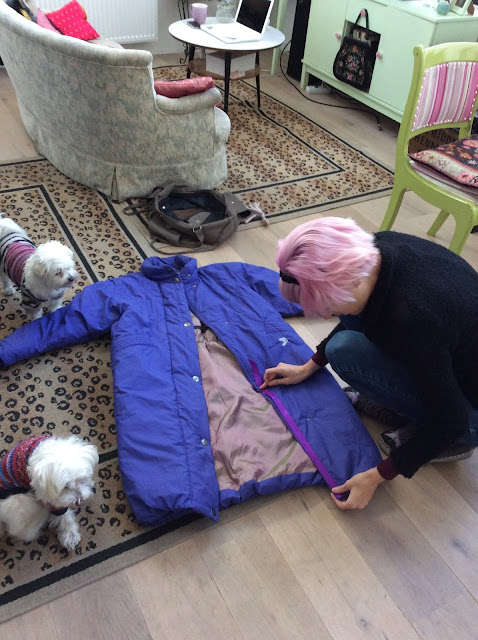 We cut part of it off, because it was kind of long. Just your regular cutting and sewing up again process. 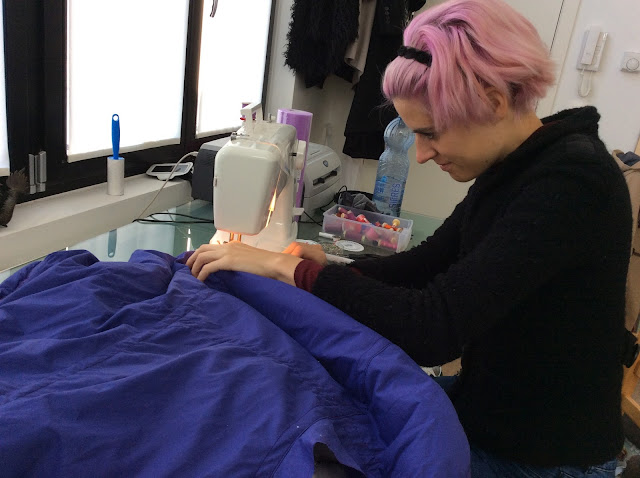 After seeing some other amazing LSP cosplays and some loofah costume tutorials I decided I wanted to work with tule to make the lumps. I ordered some online, which was the cheapest option. I cut the tule in pieces, which I then folded three times so it was layered. Elvi then tied some thread around the middle of each piece, so you got ribbons. 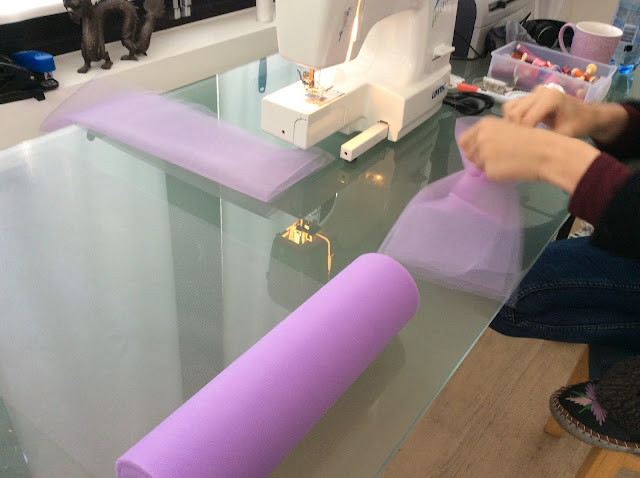 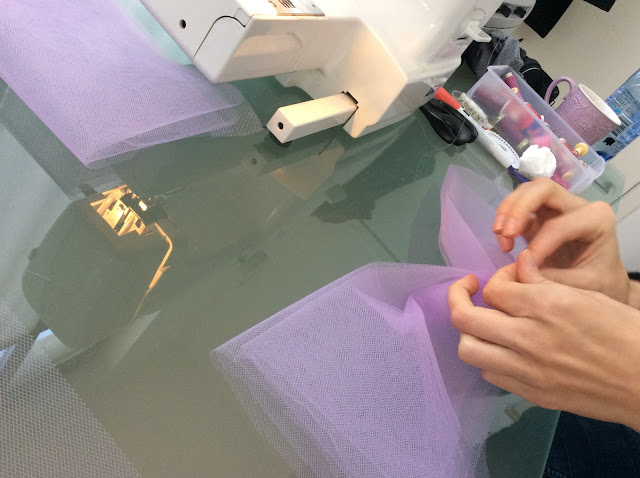 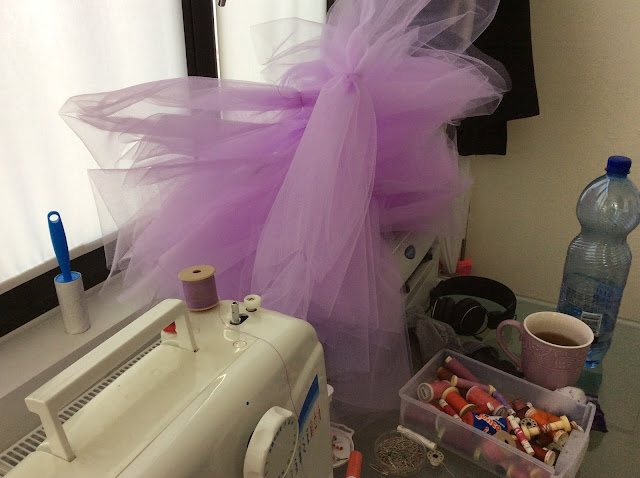 Then, once we had our pile of tule ribbons, I started patiently sewing each ribbon on by hand. Elvi pinned them onto the coat while I was wearing it, and tried to spread them out so that the coat would be decently covered. Afterwards, I sewed them on while we ate fries and watched some Jane the Virgin. The tule hangs really flat at first, so you have to lump it up a bit by going through it with your fingers. You can also use safety pins to keep some important pieces in place. Also, I curled some tule around the collar, so my neck would be covered in tule. 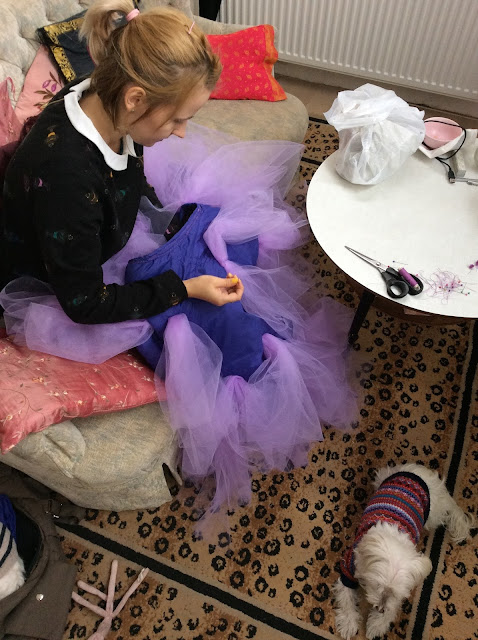 And then it was finished! It's not too hard, it's pretty cheap and it looks adorable! I also made a star, which I cut out of a cardboard pizza box. I then used some needle and thread to attach it to a hair tie, and glued some yellow fabric to it (which I got from a second hand top, also 1 euro). I put my hair up in a high bun and simply tied the hair tie around it. I applied purple eye shadow to my eyelids and cheeks and wore purple lipstick. In my ears I wore pink crown earrings, because let's face it, I'm a princess. Add some purple nail polish, purple leggings and pink shoes to that and you're done! 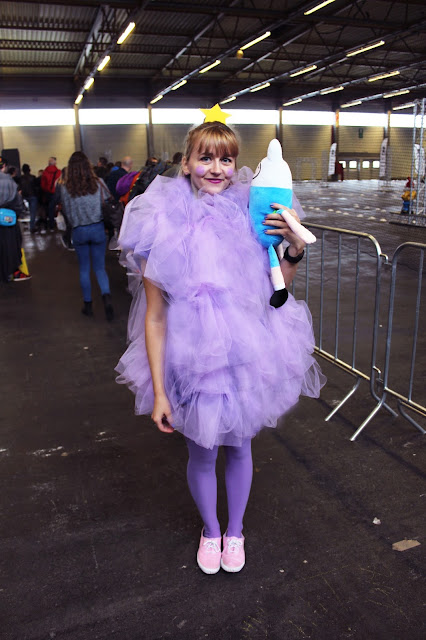 My boyfriend went as Finn. Clothes-wise this was a pretty simple cosplay because he already had everything he needed. All we had to do was make a Finn hat, which we did using another 1 euro second hand ski coat. We used this tutorial, which worked perfectly!

Darn did we look cute! If you want to read about our day at F.A.C.T.S. and see more pictures, click HERE! 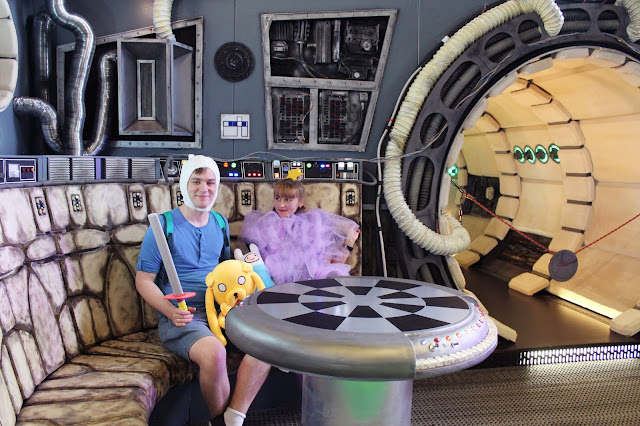